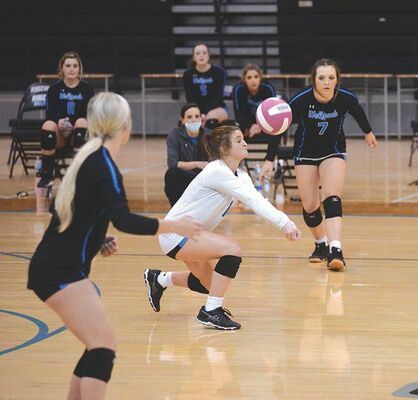 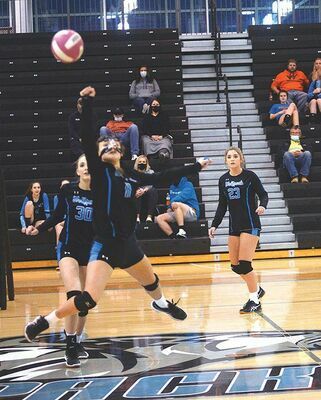 Kassidy Rasnick laid it all on the line with this running save Monday night. KELLEY PEARSON PHOTO 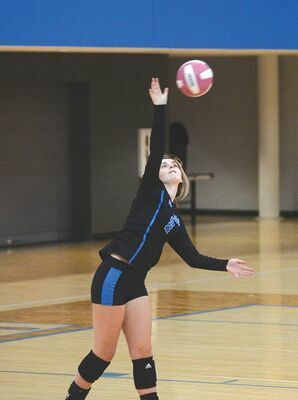 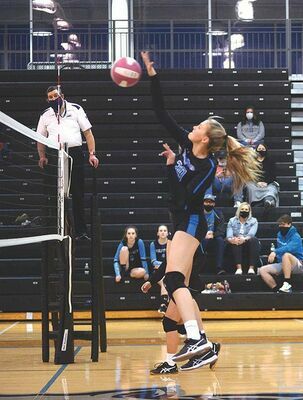 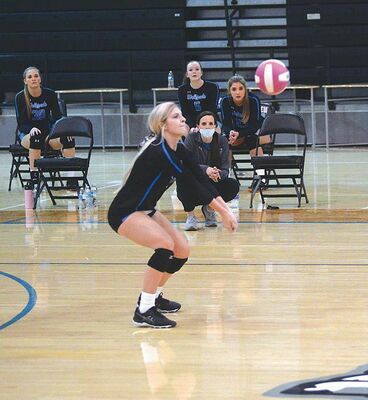 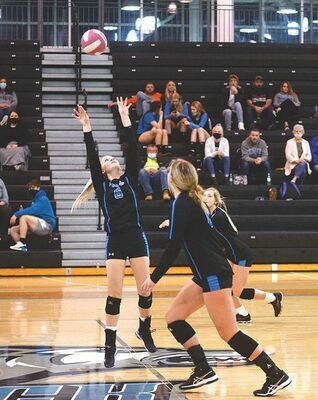 The Ridgeview offense was a well-oiled machine Monday night as Alyssa Price sets up her hitters. KELLEY PEARSON PHOTO
Previous Next

“The biggest thing we have talked about in practice is focus,” Ridgeview head coach Holly Fleming said. “We get those lulls, we get down in points and then we get down on ourselves. I feel like after that fourth set, we could have easily laid down, but we didn’t. I am so proud of them tonight.”

The first set saw both teams feeling each other out and Ridgeview had a few more well-placed shots to take the lead.

Last year as a freshman, Isabella Blagg was an all-district libero for the Lady Bears. This year, she has moved up to the front line to take a more offensive approach. In the second set, Blagg showed off both her defensive prowess and hitting to lead Union to a 25-18 victory.

The third set was highly contested that saw both teams trade points from 13-23 before Ridgeview finally edged out the Lady Bears with the last two points.

The fourth set saw Union dominate from the get-go with a 25-11 victory. That momentum carried through into the fifth set as the Lady Bears jumped out to a 10-5 lead and looked to be on their way to victory. But, the Lady ‘Pack had other ideas as they were able to put it together for the fifth-set victory.

“We’re still trying to figure out how to finish,” Union head coach Kim Moore said. “All the credit goes to Ridgeview. They’re a much-improved team. They have size at the net and you can tell they have been working. It has paid off for them.”

The Lady Wolfpack had Haley Mullins and Hailey Sutherland doing the heavy hitting on the night and the size difference in the front lines was evident. Mullins walked away with 21 kills, nine digs and an ace. Sutherland posted 10 kills and five blocks.

“Lorin just got her 1,000th dig,” Fleming said. “She’s just such a hard-worker and our biggest cheerleader. She’s our biggest communicator and she’s everywhere on the court.”

“The bottom line is we’re a young team just trying to figure out who we are, still,” Moore said. “It will take a lot of patience and perseverance. I do have a team with no quit. There’s talent there. We just have to find a way to put all the pieces together.”

Put that on repeat: Ridgeview is going back to ...