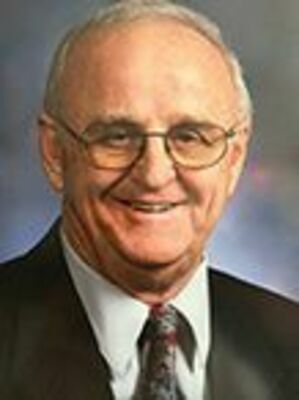 The Honorable Donald Burns Baker age 83, passed away peacefully at his home in Clintwood on Thursday, October 7, 2021 with his family at his side. He was a born again Christian and attended the Clintwood Baptist Church.

A humble, dedicated and determined public servant and community leader, Donald Baker impacted thousands of lives in a positive way.

His quiet philanthropic spirit touched many causes, organizations, and the less fortunate most often in anonymous ways.

Upon learning of his passing condolences and accolades have come far and wide from Governors, Senators, Members of Congress, Members of the Virginia General Assembly, and other state and local government leaders that exemplified the tremendous respect and admiration he enjoyed.

As a member of the Clintwood Town Council and Mayor his service spanned an unprecedented period of 41 years. Under his watch care a reliable source of public water has been provided to the Town’s citizens as well as many outside the Town. He was instrumental in working with state government leaders to locate the Red Onion Correctional Facility at its location on the Dickenson and Wise County line. He worked tirelessly and built coalitions to obtain grants and funding for many projects such as the Ralph Stanley Museum and Community Center, the Jettie Baker Center, Serco, SAIC the Sleep Inn, Kid’s Corner Park, the walking track and numerous other improvements within the community.
Mayor Baker was known by many as a strong leader and advocate for the Town and the region. “No” was not a good answer for him. He worked constantly to get to “ yes.”

He was very well known along with Town leaders for operating Town government by sound conservative financial principles. During his tenure of 41 years, there was not a single real estate tax rate increase and other taxes were reduced. Water, sewer and garbage fees are the lowest found anywhere. Being able to provide these staples efficiently to people’s homes and businesses at low cost was a priority for him.

He prided himself in keeping the Town neat, clean and safe. He was thankful to the many town employees past and present for their excellent work and dedication.
The respect Mayor Baker earned from both political parties can be seen by his unprecedented appointment to the important Virginia Coalfield Development Authority or VCEDA by five different Governor’s both Democrat and Republican. He was the only VCEDA member to ever serve as it’s Chair on multiple occasions.

Mayor Baker served on many other boards and commissions too numerous to mention. A few examples, include Chair of the John Flannagan Dam Water Authority, the Ballad Hospital Board having served as Chair of the Dickenson County Community Hospital Board, Kids Central, the Virginia Coalfield Expressway Authority and the Cumberland Plateau Planning Commission.

Donald Baker was an avid Cincinnati Reds baseball fan for over 50 years so it’s no surprise that he volunteered at every level of Little League baseball and softball for over 60 years having last served as long time District Administrator for Virginia’s District 13 and as a State Little League Officer.

Anyone who knew Mayor Baker knew of his passion of Clintwood athletics. He was a true Greenwave supporting every cause, team and working with school leaders and coaches to better facilities in every way possible.

His occupation was the coal industry where he worked in the family coal company for many years running its operation. He served as a Bank Director of Dickenson Buchanan Bank, Premier Bank, First Virginia Bank and BB&T until retirement. He also was a long time member of the Army Reserve Forces serving as rank of Sergeant.

He is survived by two sons, Greg Baker and his wife Lora of Clintwood and Mike Baker of Clintwood; granddaughter, Emily Ann Baker Dressner of Smyrna, Ga.; grandson, Thomas Gregory Baker of Chattanooga, Tenn. and one great-grandson, John Mark Dressner. He is also survived by many special cousins, nieces and nephews and so many wonderful friends.

Funeral services for Mayor Baker were a tribute and celebration of his life’s work that was conducted on Monday October 11, 2021 at 7 p.m. at the Jettie Baker Center with several special presentations.
Music was provided by Dove award winning artist, Nathan Stanley.

Everyone was asked to wear a mask and adhere to social distancing due to Covid. Funeral home and law enforcement personnel assisted in the orderly movement of entering and exiting the center as a further safety precaution. For those that didn’t feel comfortable attending due to health concerns the service was carried live on the Clintwood Baptist Church’s Facebook Live page and the Jettie Baker Center’s Facebook Live page.

Burial was held on Tuesday, October 12, 2021 in the Columbus Phipps Cemetery. A processional for Mayor Baker took him one final time throughout the Town and to his home place on Baker Ridge before arriving at the cemetery. Those that wished to participate in the processional were requested to meet at the Valley View Freewill Baptist Church at 12:30 p.m.