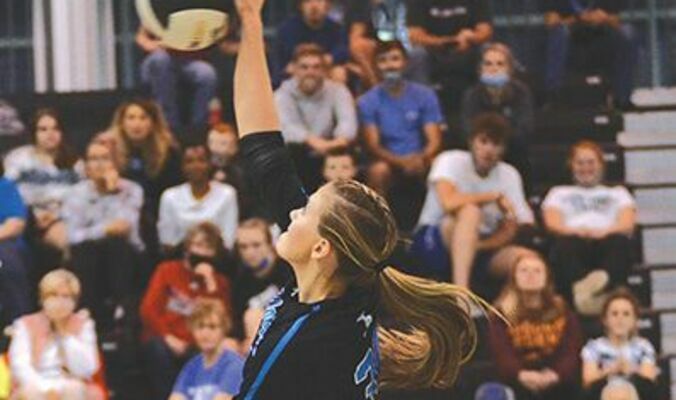 Hailey Sutherland has been laying down the law for the Lady ‘Pack. PHOTO BY KELLEY PEARSON 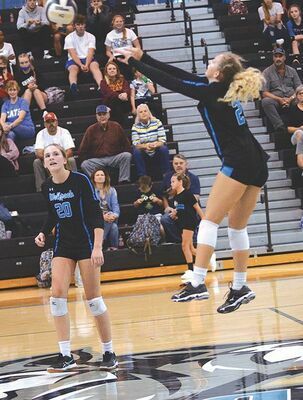 Ridgeview’s Braelynn Strouth takes to the sky to return a ball. PHOTO BY KELLEY PEARSON 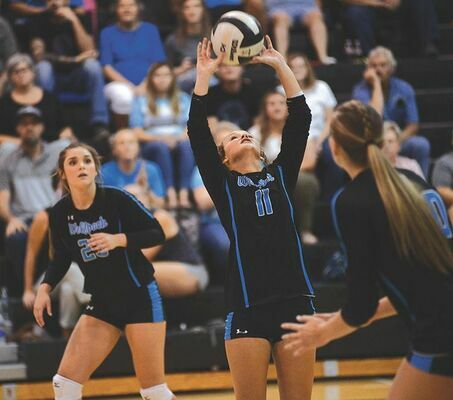 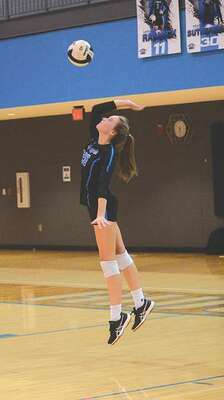 Leah Sutherland shows off her arm cannon against Central and Abingdon. PHOTO BY KELLEY PEARSON
Previous Next

CLINTWOOD — In the fall of 2018, Ridgeview celebrated their first district win over Lee High. Just three years later, under the tutelage of head coach Holly Fleming, the Lady ‘Pack picked up huge victories over Union and for the first time in school history, Central and Abingdon.

“I’m just so proud of our growth in such a short amount of time,” Fleming said.

The Lady Wolfpack got their best start in school history as well going 7-0. Once district play started, however, there were a few stumbles as they lost to Central and Union in succession. Fleming said something must have clicked after those two losses as the Wolfpack has gone 3-1 in matchups against teams from the Mountain 7 in the last week.

“At the beginning of the year, we would struggle with the little things. And now it’s really just all coming together. I’m speechless. I’m so proud of my team,” Fleming continued.

Last Thursday’s win over Central did not come easy. The Lady Warriors were able to take the first set in Clintwood while the Lady ‘Pack played point for point. The difference in this team is that the set loss motivated the team, pushing them to come out and win the next three sets.

Sisters Hailey and Leah Sutherland were apex predators on the night, as senior Hailey posted 32 kills and eight big blocks while freshman Leah earned 26 kills and four blocks of her own.

“This feels good because this first time we have ever beat Central in volleyball,” Hailey said. “We played so well as a team and had great energy. We really played like a team tonight.”

“This is my first year on varsity so this is a great way to start out our season. I’m so excited to work with these guys and I am excited to keep playing together,” Leah said.

Hailey Sutherland was quick to point out the team’s anchor, senior Kassidy Rasnick, at setter.

“I have to thank my setter,” Hailey said. “She’s the best around. Our chemistry on and off the court is amazing and it really shows we know how to communicate with each other.”

“I couldn’t do it without my Sutherland sisters,” Rasnick said. “They’re a unit and they get it done for us. Even if my sets aren’t perfect, they make it happen.”

Rasnick posted an astounding 51 assists as well as 26 digs on defense.

“I know I have a lot of roles to fill on the court. I want to make sure I do everything I can whether I’m on defense or offense,” Rasnick said.

After taking a set from Abingdon, all three players felt confident coming into Monday night’s match.

“Oh we’re going to beat them. For sure,” Rasnick said.

Perhaps Rasnick should pick up a lottery ticket because just as she predicted on Thursday night, the Lady Wolfpack came in and schooled the Lady Falcons in straight sets 25-12, 25-13, 26-24.

“This is what we can do when we keep our heads in the game,” Fleming said. “We are playing our best volleyball right now.”

After cruising through sets one and two, Abingdon started to make their comeback. The Lady Falcons tied things up before taking a two to three-point lead multiple times in set three. It would be easy enough for a young team to falter after the loss of momentum, but Fleming called well-placed time outs to settle her team.

“I think we got a little bit complacent,” Fleming said. “It’s natural to think we have it in the bag, but that’s what I preach to them. It’s never easy, especially in volleyball. There’s no room for half-hearted intensity.”

The offense was on point again for the Lady Wolfpack as Sutherland-squared teamed up for 26 kills and five blocks. But, Monday night’s game was won on defense and serves.

The service strength was there in a big way as Ridgeview posted 11 aces in the three sets and 79 digs from the backline left little chance for the Lady Falcons to rebound.

Sophomores Braelynn Strouth and Caiti Hill were all-around all-stars on the evening. Strouth posted four kills, three aces and 16 digs while Hill’s 18 digs and three kills put the exclamation point on the victory.

“I know I have to do a little bit of everything for my team and I’m here to do whatever’s needed,” Strouth said.

“This is just so exciting,” Hill said. “We were all so pumped up when we beat Central and that really just spilled over into tonight. Our coaches were constantly talking us through and patting us on the back and that really helped.”

The Lady Wolfpack will look to continue surfing the wave of momentum on Thursday as host John Battle.